Role Out the Red Carpet

One genre that I have never run much before is hard science fiction.  I have played in it very little over the years as well.  In the last three years, however, the Sunday crew has done some dabbling in the genre.  The first game for the Sunday crew was a Serenity game that ran for about a dozen sessions.  One of the other GMs in the group ran a Star Frontiers/Savage Worlds that lasted a good chunk of last year.  I suppose you could consider my Savage Mars game Sci Fi as well, although I really would classify it more as Sword and Planet or Pulp Science Fantasy.

I have, however, had a couple of run-ins with the grandfather of Sci Fi roleplaying, Traveller, over the years.  In fact, my first experience came in the summer of 1985 when I rolled up a character and played a far trader for a couple of sessions.  I am sure that it is some kind of blasphemy to say that I found the experience lacking.  The vaunted character creation system (in which you role dice and consult charts to determine your character's skills, and a bad die role could end in the death of your character before you ever played him) seemed interesting enough, but the game itself left me flat.  That happened so long ago, that I do not remember much about why I was so unimpressed.  I will say, however, that the guy who introduced it to me turned out to be a nut job, so perhaps that colored my perception.

It probably did not help that Traveller went through such a bewildering array of editions, each with a different rules set.  I was about to list them all here, but even researching it led to such a bewildering array of variants and editions that it began to give me a headache.  The upshot of it is:  there are a LOT of different games that call themselves Traveller.  Even in the olden days when there wasn't the proliferation of roleplaying products that we currently enjoy, there was enough variety out there to avoid the space game that could not seem to decide what it wanted to be.

My attitude on Traveller began to change sometime in the early 2000s, when I was part of a gaming group that rotated GMing duties.  Once, when the sessions cycled out of my hands the next GM offered up a game of GURPS Traveller in which we would play Imperial marines.  Since I don't care for military style RPGs and I didn't care much for Traveller either, I was initially not very enthused at the beginning of the game.  Fortunately, I was pleasantly surprised. Since I had no practical knowledge about the game world, I played a character that didn't have any either.  Private Calvin Ricks took his weapon, pointed it at whatever the bosses told him to, and shot things.  A lot of things.  I came away from the game with some weird incorrect impressions as well.  For example, somehow I thought the rebellious "Sword Worlders" we were fighting actually dressed like Vikings at first.  The game was a good one, but one that I couldn't devote my full attention to.  Changes in my work schedule made my attendance spotty, a situation that I am afraid contributed to the demise of that group entirely.

Still, I came away with the idea that the GURPS iteration of Traveller was self contained enough.  I understood the game system even if I did not know much about the game background. When I started thinking about what kind of space game I could run, Traveller suddenly became a more attractive option.  In the last couple of years, I have amassed most of the GURPS Traveller material and even branched out into other versions of the game as well (including at least one that I intend to write up later in the month).

The classic setting for Traveller is a sector of space known as the Spinward Marches.  This area is a bit of a borderland, where systems of under more or less human Imperial control rest uncomfortably next to the aggressive, leonine featured Aslan, the lupine Vargyr, the psionic Zhodani, and the insectoid Droyne among others.   The Marches are a frontier land, where fortunes can be won and lost all in a single faster-than-light jump from one system to the next.  The ultimate disposition of this frontier is not yet settled, leaving plenty of room for some enterprising individuals to make their fortune.  Or perhaps, to die on the surface of some hostile asteroid.  You know, whatevs.

The Imperium is a  pretty expansive place. Most sectors of space have never seen a member of the ruling family in their entire history.  For the millennial celebration of the Imperium, however, the royal family has decided to change all that.  Various royals are travelling throughout their holdings and visiting each sector.  Naturally, the competition to woo the royal visit to specific worlds within a sector, and then to impress them on the visit can lead to some very dirty dealing.  Of course, not everyone is a fan of the royal family either…

The characters will all begin the game as employees of an Interstellar Company, one with a typically shady past.  As events progress, the group may become involved with the larger craziness of the pending royal visit.
The game will allow the players to be a “trouble shooting” crew for their employer.  This allows for both a wide variety of characters, and for an eclectic mix of potential adventures.  Some stories may contain direct references to the Imperial backstory, while others may have absolutely nothing to do with it (or do they?).
Posted by Ken Foushee at 10:08 AM 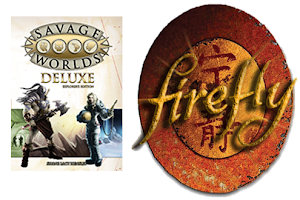